Make straight the way for the Lord

There are times at which the text of the scripture modulates its tone between history and prophecy, between narrative and divination.


The references in today’s text from the book of Luke is one of those occasions in which we find reference to historical players which help us situate the timing of the events around Jesus’ life.

Emperor Tiberius, Pontius Pilate, Herod and his brother Philip, Lysanias and the High Priests Annas and Caiaphas. The political and religious situation for the Jewish people was tense. They were essentially a conquered people with some of their own rulers and leaders making the best of the bad situation by pandering to the Romans.

According to the Roman historian Tacitus Emperor Tiberius, the second Emperor of the Roman Empire, was cruel and unjust. It was a time of turmoil.

It is into this setting that the words of prophecy from John are spoken as he called people to be baptised and repent.

John himself is claimed to be the fulfilment of another prophet Isaiah, who declared, “The voice of one crying out in the wilderness: ‘Prepare the way of the Lord, make his paths straight. 5Every valley shall be filled, and every mountain and hill shall be made low, and the crooked shall be made straight, and the rough ways made smooth; 6and all flesh shall see the salvation of God.’”

John’s words were speaking into a community in which the valleys, the hills and the mountains were clearly associated with the turmoil created for the Jewish community by the Roman rule.

It should always be remembered that the pax Romana, or peace of Rome, was peace which was dictated to people through force and the use of the sword. 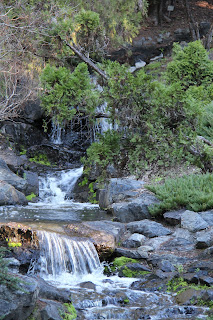 The idea that the very landscape in which the people were living, the valleys and the hills, needed to change to prepare the way for God indicates the tumultuous transformation that was necessary. It was challenge to what was commonly accepted and what was commonly practiced. There was something wrong with the way of the world.

Making straight the pathway was about correcting the crooked thinking that was present in people’s minds and telling the difficult truths about what was occurring.

Yes the prophecy was about hope and was about transformation and from the obscurity of the desert John’s lone voice challenged the Empire, the authorities, and the temple system. Turn back to God; look for hope beyond the rugged terrain of your existence, there is something more, something better on the way.

Now there is no doubt that the historical characters in the reading give us a sense of its historical placement and importance in confronting the issues of the time almost 2000 years ago but words of prophecy are not contained within a moment of history, rather they transcend the moment in which they are spoken.

To borrow from idea of Bruce Prewer, who locates the story in our present, we could just as well hear the beginning of the passage read in this way.

In the time of the minority Labor government led by Julia Gilliard, when Can-do Campbell Newman was Premier of Queensland with a landslide victory and Graham Quirk was Mayor of Brisbane. Andrew Dutney was the President if the Uniting Assembly and Kaye Ronalds the Moderator of the Synod “the word of God came to John son of Zechariah in the wilderness.”

The scriptures are not simply an historical text. They are indeed a window into our present reality and the promise of the future. From the margins of life we hear:

“The voice of one crying out in the wilderness: ‘Prepare the way of the Lord, make his paths straight. 5Every valley shall be filled, and every mountain and hill shall be made low, and the crooked shall be made straight, and the rough ways made smooth; 6and all flesh shall see the salvation of God.’”

If the valleys and mountains in the time of the rule of Emperor Tiberius were reflective of the oppressive Roman rule and the threats of that age I wonder what it might be that we can hear today about our landscape and how it needs to be straight.

Let me share 3 stories from my week in which we might hear the voice of the prophet calling us to repent and make straight the paths of the Lord.

On Wednesday I was with a gathering of ministers from our Presbytery and we heard from Aunty Jean Philips, a tireless worker among the indigenous community, who shared some of her current experiences and hopes for her people.

I was humbled on Thursday when Aunty Jean personally called me to ask after my family and to continue to share her stories of pain and hope. I heard a story of a young aboriginal woman in Brisbane who recently handed her child to another person on the train platform and then stepped in front of the oncoming train. I heard the story of an indigenous man who had been in and out of prison for 29 years who died recently and there was no one apart from jean to gather the money for a funeral.

I heard about the hope of the Grasstree gathering of young indigenous leaders in Melbourne and the people who were stepping up to work with and among the indigenous community.

As Australians what might it mean for us to declare that hope that all flesh shall see the salvation of God, not just some?

On Wednesday when we were with the ministers we were reminded that we came by boat to this land and the question hung in the air about how our government is treating Asylum seekers.

This week I read an article on the ABC website by the President of our Assembly, Andrew Dutney, who reflected on the current approach to Asylum seekers in a post entitled “The fear of others has corrupted the Australian soul.”

I want to read the beginning of Andrews article to you:

“Amnesty International has confirmed that conditions for asylum seekers that Australia has sent to Nauru are wretched. There is poor sanitation, inadequate accommodation, overcrowding, and the mental and physical health of detainees is deteriorating. Uncertainty and loss of hope breaks the hearts and spirits of people who have fled unimaginable circumstances in search of safety.

This kind of treatment is soul destroying. Not only does it crush the souls of detainees. It points to a sickness in the soul of the Australian nation.

Jesus said, "Do to others what you would have them do to you, for this sums up the Law and the Prophets" (Matthew 7:12).”

Again I ask, “As Australians, what might it mean for us to declare that hope that all flesh shall see the salvation of God, not just some?”

You may have noticed that in my preaching and speaking I often comment about my concern for God’s creation and the Climate Change which is occurring around us. For me one of the driving questions was recently addressed by another article in a online magazine. Peter Hess writes:

“In the face of global warming, a question confronting any parent is, “How can I best prepare my children to cope with the enormous changes happening in the world around them?”

Over the next decades the world will be an exponentially different place to what it is today. It is more than likely wars will be fought over water and fossil fuels and possibly even food. The oceans may already have raised enough to cause the need for migration out of some coastal areas. Many species will become extinct. The number and movement of refugees across the world will increase.

The fragility of God’s creation is overburdened and threatened by our human activity. What hope can we teach our children about their future in this world?

As people of faith, we are convinced, as Psalm 24 puts it, that "the earth is the Lord's and all it holds" (Ps 24:1). The valleys and mountains which are to be brought low seem high.

Again I ask, “As Australians, what might it mean for us to declare that hope that all flesh shall see the salvation of God, not just some?”

John’s words of prophecy are words which contain a vision of a difficult and monumental change in the landscape. Each one of us knows how difficult it can be to change any one of our behaviours, to turn in a new direction.

John’s baptism for the repentance of sin was about taking that first step in a different direction in the hope and belief that God’s peace and God’s love will break into our existence making straight, bringing low mountains and hills, helping us to see, know and experience the coming salvation of our God.

We live in a world which is as filled with as much turmoil as the time in which John wandered in the wilderness inviting people to repent. Just as much now as then we look with hope to God to bring transformation in our live personal and as a common humanity. The coming of Jesus and the promise that he will come again helps us to see beyond our current experiences and be transformed by the hope and peace and love of our God. Amen.