The Prodigal Son: by Peter Lockhart

Today we heard the parable usually referred to us the parable of ‘The Prodigal Son’. It is a reasonably well known Biblical story and one which is quite popular to teach kids – it makes a good story. The problem with it being treated like a moral tale for kids is it sets up long term Sunday School thinking about the meaning of the story.


This morning I want us to dig a little deeper into this parable and consider again its meaning and whether it may need a new title and just note that whilst Jesus did tell this story in response to the grumblings, when we look back at the gospel we notice that Jesus has already told 2 stories on the theme already: the lost sheep & the lost coin.

Turning now to the parable, to begin with I want to invite 3 people to put themselves in the role of the Pharisees and Scribes. You can come and sit here. Now it is important to understand why Jesus told his story, or to be technical it’s context.

These Pharisees and Scribes were critical of Jesus associations with tax collectors and sinners, and when you read sinners here you may very well read into this: prostitutes.

The Pharisees and Scribes are often found to be in a bad light in the gospels but the reality is that these were the moral and spiritual bastions of their time – our equivalent would be the ‘pillars of the church’, lay and ordained.

As the moral and spiritual guardians they believed that by hanging out with sinners Jesus holiness was becoming contaminated, or in their words he was becoming ‘unclean’. Being unclean meant that the contamination that Jesus carried would exclude him from engaging in spiritual activities and that he could also contaminate others.

It was like our mother’s concern about any of us ‘running with the wrong crowd’, except the implications were far worse.

In response to this quite legitimate concern of the Pharisees and Scribes, given their understanding, Jesus tells the following story.

Before I move to the story I also want a group of disciples. This is the other audience to Jesus parable. Men and women who have already decided to follow Jesus and are trying to make sense of what that could mean.

We need someone to be the father, and two sons.

To help your understanding of the story it is important to know that the Jewish culture of the time was what could loosely be described as an honour-shame culture. The honour of a family within the community was an important marker of place and identity and in this kind of culture what one member of the family did had ramifications for the rest.

Before the younger Son goes off I want to put the older son to work over here, a loyal and faithful child out working his father’s fields.

The son, we are told, goes off into a far country, which is here near the entrance of the church. There he has parties and uses his money in ways that are well to put it bluntly wasteful: which is what the word prodigal actually means. 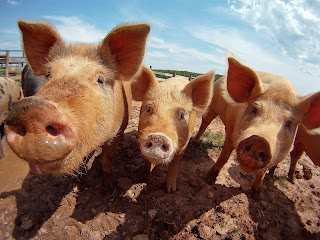 So deep is the financial mess that the son digs himself into is that he has to find work to meet his basic needs. And so he gets a job feeding pigs.

Remember Jesus is specifically telling this story to help the Pharisees and Scribes understand Jesus own behaviour and this image of the younger son feeding pigs would have been particularly abhorrent.

According to Jewish law and tradition pigs were unclean animals, so much that it was forbidden to eat pork. The boy is so hungry that we are told he wanted to take the food from the pigs to eat!

The younger son comes to the realisation that even his father’s servants are treated better than this so he determines to go home, ask for forgiveness and become a hired hand for his father.

So the son begins his journey home from the far country with his plan to beg for mercy, forgiveness and a job.

This is where the story gets really interesting and really confronting because it is pretty clear to anyone that the father in the story is meant to represent God.

The father on seeing the son on his way home jumps up, and get this, he runs towards the younger son, embracing him.

This may not seem like much to us but a man who ran like this in Jesus time would have been bringing shame on himself. It was below his station and more than that in the act of running he would have exposed his legs in a way which would have been considered indecent.

I am reminded at this moment in the story of when King danced with such joy and enthusiasm that his robes also flew up inappropriately.

The father risks bringing shame on himself in order to greet the son. This is the depth of his love; he is willing to shame himself and expose his legs, even before the son has offered his confession.

This is the other salient point before the father knows what the son is about to do he welcomes him home with exuberance.

The son offers his apology but in the face of the onslaught of the father’s love and compassion the offering of the son is almost lost in the father’s eagerness to order a new robe for the son, to offer him a ring and to order a feast be prepared.

Everything that is happening in this story is challenging the bedrock of the Pharisees and Scribes understanding of God’s relationship with the world. God does not want to exclude the unclean and unholy but embrace them and welcome them home.

This is a difficult thing to understand and the older son who is working in the field, doing the right thing, as it were, now comes back into the picture.

The older son on discovering what is happening refuses to go into the celebration; he judges both his brother and also his father harshly for their actions. Once again the father’s compassion and love enlarges to embrace the older son as well. The father affirms the older son’s actions and reminds him of how much they have shared, saying, ‘all that is mine is yours.’

The older son is not reproached but the father with gentle understanding and compassion reaches out to draw him into the celebration as well.

The message is confronting as Jesus is affirming the efforts of his critics, the Pharisee and Scribes, as well as letting them know that God’s love is big enough to transcend the boundaries, imagined or otherwise, between the holy and the unholy.

Now I do not want to deny that there is a clear association between the older son and the Pharisees and Scribes, nor between the father in the story and God. The younger son though is a bit of a conundrum and there could be a clear danger for us to begin to read ourselves into the younger son.

So often our approach to these stories is like Narcissus at his pool, trapped staring into the pool seeking our own reflection. But here I think there is another approach.

There is an ancient tradition of interpretation that associates the younger son with Jesus. The younger son represents Jesus journey from exclusively divine being into the far country of created existence. He associates himself with our prodigal existence, wasteful of God’s love and the wonder of creation; he goes to a place that is Godforsaken, not feeding pigs but on the cross. And then, rising from the grave he returns to the Father where he is welcomed with joy and as he returns we journey with him into the Father’s embrace.

Now if we return to the other 2 parables which precede this one they are stories in which God seeks out that which is lost, lost sheep and lost coins. I believe in this parable Jesus elucidates just how far God is prepared to go to find us – God will journey in Jesus to the far country of our existence to include us.

For the Pharisees and Scribes this means adjusting their worldview to the possibility that Jesus association with tax collectors and sinners is not about him becoming unclean but an expression of God’s reaching out in love.

For the disciples who want to follow Jesus, not only is there a warning not to become Pharisees and Scribes, but there is an invitation to follow Jesus to the margins, to the places that we may think of as God forsaken and with Jesus declare good news to those who are lost.

At the beginning of the sermon I suggested maybe a renaming of this story.  Maybe it could be more focussed as the Loving Father or Everyone's invited but I think I like the confrontation with th idea God would go as far as to shame himself to welcome us home so I like "God exposes his legs!" I know it is a bit obscure but it turns the parable and its interpretation in a different direction - God's movement to us.
We believe in a God who runs to meet us in Jesus, risking shame, exposing his legs, because love and mercy and compassion flow so deeply that the shame is more than worth. We believe in a God who would not only dine with tax collectors and sinners but clothe them and provide the feast. The good news is that we believe in a God who loves us and all people this much. Take a moment to consider God’s word to you this day.