Chapter 11 of the letter to the Hebrews begins with that well known definition of ‘faith’.

“Faith is the assurance of things hoped for, the conviction of things not seen.”

This definition of faith is a definition that reminds that having faith does not mean that we have arrived but I think unfortunately, especially in Churches like ours in the West, we have fallen into the trap of thinking exactly just that.

Our lives are very comfortable, we have great freedom in our culture, we can come to this property that we own and sit in our regular pews week by week to worship God.  All of these things point to the idea that we have settled down, we have made our home.  And to be frank the sentimentalism and over attachment that we have to our properties and bank balances is a sign of exactly this problem. 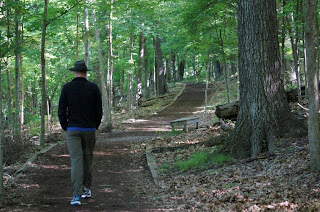 But when the author of the letter invites the Hebrews to reflect on Abraham he reminds them that these early proponents of faith “confessed they were strangers and foreigners on the earth” who were “seeking a homeland” and desired “a better country”.  These people were on a journey and so are we are.  As faith takes hold of us we are not being encouraged to settle down but to join the pilgrimage!

The question is then ‘what does it mean to be on this pilgrimage of faith?’  I want to address three aspects of this question for us to consider as a congregation that arise from the readings this morning.  The first is to do with the timing of our arrival.  The second and third are to do with what we are to be doing on the way.

Our destination as Christians is not so much a place that we reach but the timing of the fulfilment of God’s coming kingdom and we won’t know when that is going to occur.

It’s like we are a bunch of kids whose parents have gone out.  Left with the responsibility of looking after the house while mum and dad are out we have choices to make.

Will we order pizzas and get a video; will we break into the drinks cupboard and invite some friends around for a party; will we do the chores we were asked to do?  What are we going to get up to and what will happen when we hear the crunch of our parent’s tyres in the driveway?

Jesus’ challenge is there for people to contemplate because he is inviting people to be prepared for his return.  We don’t know when we will arrive at our destination so the imperative is to live as people who do what we were asked to do while we wait for Jesus return, for our waiting is an active waiting not a passive thing.

The brings me to speak about the second point I wanted to raise from the readings and it has to do with the church in the Western world in general and so specifically our congregation as well.

Between the Psalm and Isaiah there was some tension about the life and worship practices of the Israelites.  In the Psalm God declares “Not for your sacrifices do I rebuke you,” but then in Isaiah the Lord declares “What to me is the multitude of your sacrifices?... I have had enough of burnt offerings of rams… I do not delight in the blood of bulls, or of lambs, or of goats… bringing offerings is futile; incense is an abomination.”

There is no doubt that we are called as God’s people to gather and offer worship to God, to offer our sacrifice of praise.  So why does God mount this tirade against the cultic practices of the Israelites.  The answer is that despite the worship practices there seems to be a disconnection between the worship and the daily life of the people.

Now I would point out that Christian worship is distinct in a number of ways to the worship that we find in the Old Testament.  Primarily in as much as we are now participants in God’s coming kingdom achieved in Jesus Christ. Despite this it is no less important that there is a connection between what we express in our gathered worship and our lived faith journey day by day.

So how the connection is going?  A few years ago I was at a breakfast with Tim Costello and Steve Chalke an English Baptist Pastor.  One of the things that Chalke said has stuck with me.

He told the gathered group that around 60 to 70 years ago in the Church was very much the centre of the community.  The Church ran hospitals and schools and orphanages and helped the poor and basically provided much of the social infrastructure of the society.  Things changed though and the government started to develop welfare systems and provide the social infrastructure that had once been provided by the Church.  The consequence of which was that this task of the church in the community became either regulated or lost completely. Many Christians became detached from their sense of service.

The end result in Chalke’s opinion has been that Church people have become a bit like shut-ins who get together and sing songs that are largely irrelevant to most of the culture around them (modern ones or ancient ones!) and argue among themselves about things that no one else cares about.  Why? Because, he says, they have become bored.  Now whilst I think Chalke is probably overly harsh I believe he does have a bit of a point.

When we lose the other out workings of our faith and disconnect the relationship with God that we celebrate on Sunday with our day to day life and the problems of the world we are missing the point.  What Chalke describes is not simply the problem that as congregations we have settled down but that in settling down we have ceased being interested in going out.

As congregations like ours struggle harder and harder to transform our worshipping life and make it more relevant, it has to be said that unless this is accompanied by a closer engagement with the world around us then I suspect we won’t get very far at all.  When we think about following Jesus and being the church and serving I believe we are called to think of our Christian service as far broader than greeting at the door or doing the readings or even leading a prayer.  Our pilgrimage of faith is a day by day thing and we are called to live our faith in every setting we find ourselves.

This brings me to make a third point about how we are to live on this pilgrimage of faith.  I want to raise for us a couple of issues here.

Firstly to say that at the beginning of Isaiah we hear that Isaiah saw the vision in the days of the kings Uzziah, Jotham, Ahaz and Hezekiah.  Isaiah then speaks the word of the Lord to the rulers.  In other words religion and politics do mix.

Going back to the reading from Hebrews if we are seeking a better country or if we are seeking to bring signs of the coming kingdom into reality in the world this means engaging seriously with the social and political issues.  This is particularly pertinent as e weigh up how to vote.  Whilst different church groups and individuals may have different agendas in their engagement with politicians the idea that our faith is lived politically is an important one.

Now as we are aware we are approaching a federal election and I am aware that many of you have particular political allegiances.  I do not believe it is the place of the church to support a particular party, despite some comments to the contrary, I do not believe that the Uniting Church has a particular political allegiance.  What we are called to do though is to weigh up what we are being told by any party with the good news of our faith.  This means remembering that our first allegiance as Christians is to Jesus Christ not the political party to which we may belong.  More than that as we listen for the prophets in our midst we should listen for what they might be saying to those in power.  Just as Isaiah spoke to the kings long ago so too there are people who bring the Christian message in confronting ways before our political leaders.

The second issue I want to raise here is that our pilgrimage of faith calls us to do what the Lord challenges the people with in Isaiah.  In the prophecy God is less concerned about sacrifices and more concerned that the people “learn to do good, seek justice, rescue the oppressed, defend the orphan, and plead for the widow.”  These groupings come up often in the scripture and they represent to us all those in society who are disadvantaged and ostracised.  This is where the rubber hits the road – being the people of God means helping these people and this as Jesus points out is a personal thing.  Jesus said to his audience “See your possessions and give alms.”  The call to serve those who have less than us is a gospel imperative and just as much an expression of our faith as coming to worship on a Sunday.

As a congregation we do this in small ways and I am aware that many of you as individuals also engage in issues of social justice and serving others.  The question remains before us constantly as to how we might continually connect in relevant and real ways with the community around us and the world at large in our faith journey.

Ultimately we cannot see the fullness of God’s kingdom yet, we hope for something that is yet to come, this is what drives and inspires us.  As you consider God’s goodness in giving you a foretaste and share in the coming kingdom I want to invite you to think about your own faith and our faith as a congregation.  Are you feeling that you have arrived?  Have you settled in and become too comfortable in this building and in your favourite pew?  How is God calling us to be his people here and now and how will respond?

I think that there are exciting signs of God’s faithfulness in our midst and that rather than slowing down we are being challenged and called to do more.

In the silence I want to invite you to listen for Gods challenging Word to you on this day.
Posted by PJtheoLogy at 10:03