On a dusty hill in Caesarea Philippi.

See for a moment a group of dusty travellers on a Middle Eastern road, dressed in robes and sandals, wearing turbans on their heads to protect them from the sun and wind, they are trudging into the ancient region of Caesarea Philippi.

These are a group of men filled with hope.  They have seen miracles and heard teaching that has change their worlds.  They are simple men, ordinary people, fishermen, tax collectors and sinners who have captured a vision that maybe; just maybe, God’s intention is love and not judgement, healing and not retribution, forgiveness and not punishment.

Their leader has crossed boundaries of race and class and gender and caste.  He has even healed those whom he had called dogs. 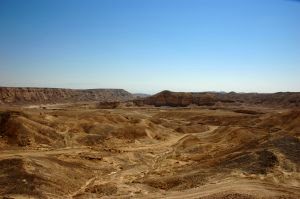 This ragtag group ascend a hill and come to a point that can see clearly for miles around: to the north and the south and the east and the west.

What can they see and what do they know of the lands they survey?  Imagine for a moment looking through their eyes: looking with eyes that can see beyond the horizons of space and time - look with them.

They look south and they see the Holy City Jerusalem an occupied territory overrun by Romans and a place of constant dispute and warfare.  They see Jews and Muslims and Christians fighting over a land which each claims as Holy in an exclusive and combative way.  They hear in the distance the sounds of rockets fired by Hamas and missiles raining down from the Israeli army.  How can a land of such bloodshed by a Holy place?  Is that what God desires from any religion?

They look to the west through Lebanon and across the Mediterranean Sea and they feel the presence of the centre of the empire looming large: Rome!  The Empire is reaching its tentacles into all the parts of the world that they know.  Since then, it has been an example for kings and empire builders through the ages, an example that conquering others is the way to establish peace – the pax Romana: an idea grounded in conquering and spilled blood.

Turning to the north they see through Turkey, the great seat of the Ottoman Empire and trading centre.  It was the home of the Orthodox Patriarchs, a reminder of the conglomerate that is the church.  And, looking further, beyond the black sea there is Ukraine another disputed territory of our time.  The world continues to lament the downing of a Malaysian passenger plane filled with a cargo of innocent lives.  Meanwhile, the combatant’s fire relentlessly hoping that their next bullet will make their lives better but the same question must be asked again and again, “Does another shot fired in anger ever make the world a better place?”

And now they turn to the east looking across the deserts and plains.  The see into Syria and witness a flood of refugees coming from a worn torn country as a country collapses into ruin.  Camps filled with the flotsam and jetsam of humanity desperately cling to their lives after their country descend into chaos. And, beyond Syria, there is Iraq where ISIS and ISIL now revert to the most barbarous behaviours to justify their religious claims for autonomy and privilege. Will the conflict ever end?

If these dusty tired men of ancient times could see all of history unfolding, all around the world would they be as deeply disheartened and disillusioned with humanity as I am.  Yet I remember that in the moment in which they lived they experienced life as a conquered and subjugated people – the cruelty of Rome was the peace they knew.

Why hope?  Why go on?  In an enemy territory confronted by the complexity of politics and religion and power they stand on this hill and their master turns to them and asks:

One of them, a leader for the others, dares to answer with words which echo through the ages:

“You are the Messiah, the Son of the living God.”

This man Jesus, a Jew by birth, claimed by Christians as God’s Son, honoured by Muslims as a prophet, recognised by historians as a man of great compassion and teaching makes this exclusive claim. A claim which rather than meant to divide was meant to open out the reality that the sectarianism and violence of our world and our decisions and our mistakes as human beings are not the end in sight for God.

The story goes on that instead of responding to violence with violence this ‘Son of God’, this ‘Messiah’, submits himself to death, even death on across, and he promises that when he is raised up all will be raised up with him.

It is these words which I have little doubt that inspired Paul to later write it was God’s will “through him to reconcile to himself all things, whether things on earth or things in heaven, by making peace through his blood, shed on the cross.”

The hope for these tired men standing in this dusty hell of humanity, staring out into the tragedy of human history, is that the One whom they are standing with is going make everything different; that in him God will reconcile the world with its Creator and we as human beings will learn to love one another.  We hope in things we cannot see and that even those who walked on the road with him could not see, but let us continue to hope and to expose ourselves to God's love which conquers hate and refuse to respond to violence with more violence.
Posted by PJtheoLogy at 11:36