Ripples of the Resurrection 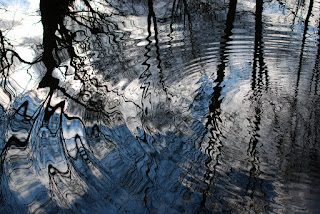 For many of us the resurrection of Jesus is an intensely personal thing.  In our lives we have encountered the good news of Jesus for ourselves and we have found hope that in Jesus God was doing something wonderful for us.  We have felt the power of the resurrection, we have contemplated its mystery and its depth – there has been a moment of revelation and of hope.  Resurrection is God’s response to Jesus’ death.

Whilst we might celebrate our place as recipients of this good news we should remember that what God was doing had implications for the whole creation and so on this day we are called to reflect on how far the ripples of the resurrection might reach.

On the same day that Mary and the women found themselves going to the tomb far away on the northern coast, of the place we now call Wales, the sun rose over a small village of Celts. They had heard the rumours of the Romans.  They even had a few trade items which had made their way across Briton and into their small village.  The men and women got up to go about their daily work, coming out of their wattle and daub huts to face the cold morning air.  A child could be heard crying and a dog howled in the distance.  Thousands of miles away the women found the tomb open and wondered at this mystery but in this Celtic village no soul was stirred by the miraculous news and no one in this place would even hear the story of Jesus resurrection for almost 200 years.

Within the tomb the women were greeted by an angel, a messenger, who asked them, “Why do you look for the living among the dead?” But the question was not heard half way across the world near the Ganges River where some farmers from the Kushana Kingdom gathered in their crops from the field.  On the day the women puzzled over the angel’s words the Kushana toiled under the hot sun. They had no mind for the God that Jesus called Father. They were not to hear about Jesus or his resurrection in the Eastern reaches of India for many a century, even though Thomas is said to have arrived in India in the year of our Lord 52, Anno Domini.

The women wandered away from the tomb and back to the disciples whilst on a southern island continent the Jagera people fished in the river not far from where we meet today.  The fishermen had a strong sense of connection to the land, spiritually they understood themselves to be part of the land.  They had a deep sense of connection to the creation and to their ancestors that had been in the area for generations that stretched beyond their memories.  It would be another 1800 years before the news of Jesus resurrection reached them through a conquering race who saw the Jagera people as less than human.  As the women shared their news with Peter and the other disciples the strongest emotion was disbelief.

Peter made his way to the tomb to find it empty whilst on the same day in South America the great cities of the Mayan culture thrived.  Children played whilst women watched over them.  Men hunted and collected crops under the same sun that beat down on Peter as he ran to the tomb.  For the Mayan culture the cycle of life continued birth and life and death merged into an eternal process of existence and it was 1500 years before anyone here would know anything about Peter’s confusion and elation.

I could go on with such stories.  Stories that remind us of cultures and peoples who knew nothing of Jesus death and suspected resurrection from the moment it happened to the centuries that followed.  But the question lies before us how did the ripples of the resurrection flow out to impact the lives of these peoples as well.  And how does the resurrection of Jesus roll down to us through the centuries?

What is clear in the stories of the day of resurrection is that the disciples themselves struggled with the mystery, that whilst Peter was amazed, disbelief and confusion were also rife.  Yet, what God had done was already taking effect.

As the news of the mystery was being shared Jesus presence in the world and the empty tomb signified that God’s love had triumphed – that God’s will for the whole creation was not destruction but recreation.

God is faithful to the promise made to Noah never to destroy the creation again and whilst changes are still to come the creation goes on and death does not prevail, but life.

For the Celts, for the Kushana, for the Jagera and for the Mayan’s, as well as the myriad of other cultures that have ever lived, the ignorance they have of the events of Easter does not, cannot, preclude them from being recipients of grace.  At a very basic level the fact that the creation goes on is a sign of God’s love for them.  Beyond this it is not our place to suggest that anyone else is left out of God’s grace but to continuously remember the promise of the book of Revelations that in Christ God was making all things new and of Paul that there will come a day when every knee shall bend and every tongue confess that Jesus is Lord, to the glory of God.

The great Russian scholar Alexander Khomikoff, over 150 years ago, said this: “The rest of (hu)mankind, whether alien from the Church, or united to her by ties which God has not willed to reveal to her, she leaves to the judgment of the great day.  The Church on earth judges herself only, according to the grace of the Holy Spirit.” (Khomiakoff in Birkbeck 1895: 194)
The ripples of the resurrection go out.  Like the ripples across the water in a pond they continue outward to very edges of the creation, the ripples of the resurrection transcend time and they transcend cultures.

As people who have experienced the good news of Jesus in our lives our place is not to judge but to be what Christ calls us to be ‘a priesthood of all believers’.  The role of priests is to come before God on behalf of others and to come before others on behalf of God.  We come on behalf of others who do not know or understand the good news yet in the hope that the ripples of resurrection will be felt in their lives.  And we go out into the world in the hope that as we share the good news of our personal encounter with the crucified and risen one, Jesus, they too might be transformed by the story of God’s love.

It is difficult for us to imagine what the women and disciples understood and felt on that day so long ago but whatever it was God’s faithfulness to the creation was being played out in Jesus.  Eventually, it is the stories of this imperfect people that have passed on through the centuries so that we too might ponder the resurrection of Jesus and consider how the ripples of the event have flowed down to us through time and beyond the boundaries we create.

At the same time as that as we encounter the mystery of the empty tomb we should also find hope in the idea that what God was doing in Christ was an entirely and powerfully cosmic event.  An event that can lift our hearts and heads in hope above the suffering and death and exclusion we see in this world.  An event that speaks of God’s faithfulness to all that God has made as see the ripples of the resurrection and hear the deep echo of hope for peoples, in all times and in all places: “Behold I make all things new!”