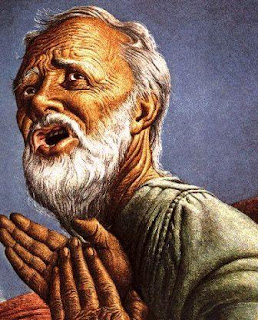 I am not preaching on the lectionary this week but here is my sermon from 2007 on the story of Abraham and Isaac Gen 22:1-14.

I said to someone the other day that if I allow the Old Testament passage to be read in today’s service then I must also preach on it. This is simply because of the challenging and disturbing nature of the story. I would also say that this sermon comes with an M rating – for a mature audience, for the story in itself should carry such a label.

The story of God’s testing of Abraham is one which raises all sorts of questions and has been much meditated upon and written about in the history of Biblical studies. The idea that God would test a man by asking him to sacrifice his son is utterly distasteful. It is a horrific tale so far beyond comprehension that at face value it can cause a person to ask, ‘Is this really the kind of God I want to be associated with?’ A God who asks for infanticide!

But digging deeper into the narrative that has already unfolded for Abraham the extent of what he is ask to do goes far beyond this. Abraham was an elderly man and in ancient times the future and hope of a person was intricately tied to having children, particularly sons. Abraham and Sarah had waited so long, and eventually had used a surrogate, one of their servants Hagar, to produce the heir Ishmael whom Abraham had loved as his son.

Then in the midst of human impossibility for Sarah, Sarah conceived and bore Isaac, even though she was in her eighties and had laughed at God’s promise for the provision of this child. With a true son to be the heir of Abraham and Isaac, Sarah told Abraham to send Hagar and Ishmael away. Abraham questioned God on this matter and found reassurance that God would deal well with Ishmael and make a nation from him. And so Abraham sent his first born son away confident in God’s promise that his name and his nation would rise through Isaac.

This sets more starkly in its context the test which God brings to Abraham. It is not simply the request to kill his son, which is abhorrent enough in itself, but the request to kill the son long waited for to fulfil the faithfulness of God to Abraham and Sarah and who was also promised to provide a future and a hope for them and the world.

The question is no longer simply how could God ask a man to kill his own son but how could God command Abraham to do something which seemed to so contradict what God had already done: his faithfulness in providing Isaac.

For listeners to the story and readers of the scripture the story opens with the revelation that this is to be a test for Abraham. Maybe in being told this the blow of what is asked is softened. We might reasonably imagine that God whilst asking this horrific thing does not really intend for Abraham to carry out the act. Yet what we need to understand is that Abraham does not know this is a test he bears the full emotional force of this divine command and his faithfulness to God, his trust is astounding.

One of the reasons Abraham’s faith here is so astounding is that on other occasions when God had made such grave decisions Abraham had questioned God. When God sought to destroy Sodom and Gomorrah, veritable dens of iniquity, Abraham had pleaded on their behalf. When Sarah told Abraham that Hagar and Ishmael were to be sent away Abraham was deeply distressed and questioned God.

But here, now, in this story, when asked to kill his son we are told, “So Abraham rose early in the morning, saddled his donkey, and took two of his young men with him, and his son Isaac.” No questioning, no pleading on Isaac’s behalf; just a mechanical going through the motions. Could it be that he was simply numb with the shock and horror of what he was to do? Or could it be that in the face of previous impossibilities Abraham placed his trust in God to create another possibility so that his blood line could survive?

The Rabbis called this story the binding of Isaac. What do we do with it? How can we reconcile this image of God with the God of love whom we wish to proclaim? For even if we think that God was never really going to let the act be carried out how can we countenance such terrible games played with the lives of mortals?

Whilst Abraham’s faith is upheld in the letter to the Hebrews, do we really want to have such a blind mechanical faith that when we hear God’s voice we are obedient to the point of acting in such terrible ways? For me this makes us no different to those Christians who have placed bombs in abortion clinics or the terrorists who strap explosives to themselves and walk into crowded market places. How do we discern God’s voice and differentiate it from other voices we may hear? The voice that many a murderer has claimed has spoken to them – go into this place, or that, and kill in my name! Is our faith so blind, so unquestioning, so obedient that it cannot discern the inherent evil in such actions?

These are disturbing questions, questions that cut us to the core and this very story has been enough for people to reject God and the Biblical witness because of these kinds of issues.

Yet for me the Bible does contain the witness of God’s love for the world, the coming of Jesus, the story of the covenant and if I am to accept the stories of faith it tells then I must, you must, be able to give an account for the inclusion of the difficult passages of scripture just as much as we want to hold on to the sentimental passages that fill us with warm and fuzzy feelings.

We know what hangs in the balance for Abraham – his son, Isaac, so with this in mind we have to look from the perspective of the other stakeholder in the test: God! What does God risk in this encounter? What do we learn about God?

In asking this unseemly act of Abraham God puts at risk the very covenant he has entered into with Abraham, a covenant that began many years early when he asked Abraham to leave his father’s house. The Old Testament scholar Terrence Fretheim reverses the questions for us, he asks:

“Is this not only a test of Abraham’s faith in God, but also of God’s faith in Abraham?” Fretheim assumes this is the case as he asserts, “God places the shape of God’s own future in Abraham’s hands, in the sense that Abraham’s response will affect the next move that God makes… Something is at stake for God in this matter”

What is at stake for God is the covenant relationship and the possibility that what God has invested in by entering into covenant with Abraham will fail. If anything the trust that Abraham exhibits that God can work this situation out ups the ante for God. The scripture poses the question can God really be trusted or will God require the infanticide that Abraham has been commanded to commit?

When Abraham says in response to Isaac’s question about where the sacrifice is Abraham declares his trust and his hope that God will provide a lamb. Just as there is a lot riding on the outcome for Abraham so too God is placed in the position of being tested – “can this God really be trusted”, maybe even “should we love this God”?

As the story unfolds we see that God can be trusted… a lamb is provided and Isaac is spared. In the end we find that God’s trust in Abraham was warranted and vice-versa, Abraham’s faith in God was reasonable even in the face of the bizarre command that Abraham received.

There are many lessons we might ponder for ourselves from this story not least of which is how we approach our understanding of difficult passages. There are also many questions left hanging.

In this story what Abraham will do appear to be unknown by God, Abraham has genuine freedom to act as he will and what he does will have consequences. Whilst in other parts of the Bible we might have a sense of God predetermining things this story indicates that God entrusts to human beings the freedom to respond, or not, the commands God gives. God is no puppeteer pulling all the strings as it were. If Abraham did not have a choice, or if the all knowing God knew what Abraham would do then the test was a furphy, there was no real test just an expected outcome. This raises questions for me in terms of human freedom and God’s knowing which are a little too difficult for me to explore at this point, suffice it to say that we have freedom in our choices and maybe the possibilities of our choices are unknown not simply to us but to God.

This is a vital principle to bring out in the second issue which is the willingness of God to be vulnerable in the context of the freedom of human response. Ultimately this vulnerability is exposed in the story of Jesus of Nazareth in whom we believe God was fully present yet at the same time was fully human. Jesus resistance of temptation and choice to walk all the way to the cross involves real choice, a real risk it could have gone otherwise. If this was not the case then it was all a charade.

Ultimately God’s choice of vulnerability leads to a response of rejection and condemnation – Jesus is betrayed, deserted, condemned and hung on the tree by human hands. Whilst Abraham stayed the course and followed the command when God becomes fully vulnerable in being one of us human beings reject God.

The grace present in the story of Jesus life, death and resurrection though is that whilst humanity rejects this God who is so freely vulnerable God’s choice is to renew the covenant and in Jesus bear that rejection so that we might remain with God in that promised relationship.

There are times that confronted by the complexity of life and the complexity of the Biblical message we might rather turn away. As I contemplated the story of Abraham and Isaac this week I wondered how could any of us believe in a God who would ask such a thing of a father. And, I must be honest that this was a very personal response to the concept of killing a son. Yet as I have struggled with the passage and the questions it raises maybe the question I might now rather ask is, “How can I not be willing to be faithful to this God who would be so willingly vulnerable to those he created by giving them, us, so much freedom?”

I do not think we have covered everything in this story by a long shot but maybe, just maybe, despite its macabre and horrific nature we have found some reason for its presence and for our own faith to continue.
Posted by PJtheoLogy at 17:27